Variable regions of T-cell receptors (TCRs) form in the postnatal period, such that no innate immune tolerance exists to TCRs which makes TCR immunogenic for the host immune system. Specifically, the immunogenic TCR regions are called idiotypic epitopes (Figure 1), which are recognized by a idiotype-specific (anti-idiotypiс) variable region of another TCR in the context of the major histocompatibility complex molecules (MHC). 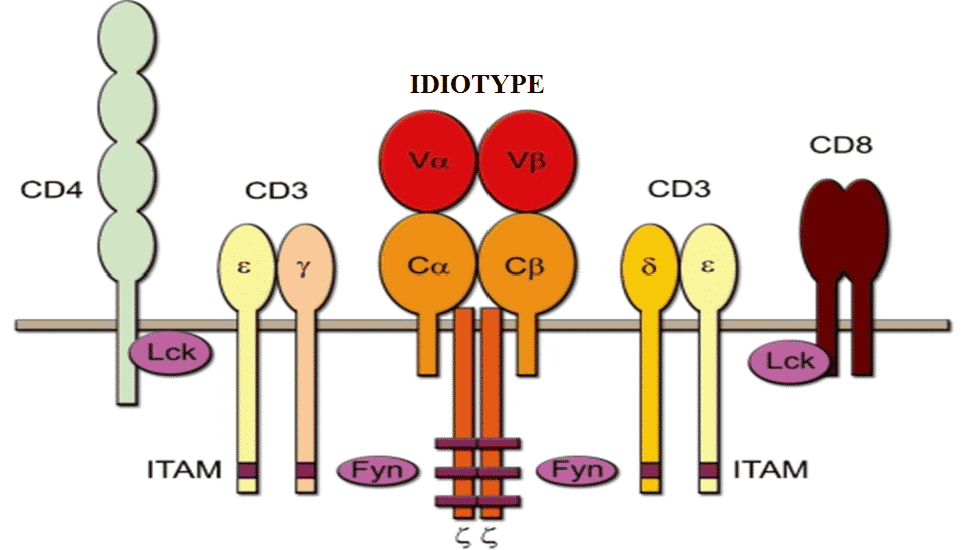 The role of anti-idiotypic T cells consists in regulating idiotypic T-cell activity. The concept of T-cell vaccination (TCV) is based on multiple immunizations with pathogenic T-cells to delete or inactivate targeted T-cells. TCV-induced anti-idiotypic T-cells have been shown to consist of both CD4+ and CD8+ T-cells, with fine specificity for hyper-variable TCR regions, including both CDR2 and CDR3 determinants (Zang et al. 2000). The CD8+ T-cells may be cytotoxic and/or inhibitory for CD4+ target T-cells (Buenafe et al. 2004). By secreting a variety of cytokines, including IL-4 and IL-10, the CD4+ T-cells may down-regulate the function of pathogenic immune cells. Moreover, the TCV-stimulated, CD4+FoxP3+T-regulatory (Treg) cells can inhibit the activation of target T-cells through cognate T-T interactions (Seledtsov et al. 2010; Vandenbark & Abulafia-Lapid 2008).

T-cell Immunotherapy (T-cell vaccination) can be useful for the treatment of the following diseases:

The above-described technology allows to keep the original proportions of pathogenic T-cells. This means that the particular T-cells that play the most important role in the development of the disease will be making the most significant contribution to induction of anti-idiotypic immune responses to the patient-specific TCV formulation. According to our observations, a disease remission can develop within first few weeks after treatment onset.

See our publications for more information.

Multiple sclerosis is a demyelinating autoimmune disease targeting brain tissues. Self-reactive T lymphocytes targeting brain-associated antigens play a major role in the pathogenesis of multiple sclerosis. Standard treatment of multiple sclerosis patients is based on nonspecific (nonselective) immunosuppressants/immunomodulators, such as hormones, interferons and others, which are, indeed, incapable of interrupting immunopatological events underlying the disease and are frequently associated with serious side effects.

Autologous T-cell vaccination exploits natural immunoregulatory mechanisms of patients aiming to achieve a selective inactivation of pathogenic autoreactive Т lymphocytes. A total of 32 patients with remittent multiple sclerosis were enrolled in a clinical trial. As shown in Figures 1 and 2, T-cell vaccination dramatically reduced the exacerbation rate and significantly improved the neurological status in patients during the first 2 years after treatment (P <0.05).

Figure 1. The exacerbation rate in patients (n=32) with remittent multiple sclerosis before and after immunotherapy onset.

Figure 2. Neurological status in patients (n=32) with remittent multiple sclerosis before and at 2 years after immunotherapy onset.

Disease stabilization and/or neurological improvements were documented in 29/32 (~90%) patients from the treatment group, while disease progression was observed only in 3/32 (~10%) patients. Figure 3. Percent of patients with chronic multiple sclerosis with no signs of disease progression over 2 years in the treatment and control groups.

Overall, our clinical data suggests that the nervous system of multiple sclerosis patients retains certain regenerative potential that can be activated when disease progression is stopped. We also conclude that autologous T-cell vaccination could be clinically effective in early and advanced stages of the disease.

Pro-inflammatory autoreactive T lymphocytes specific for cartilage-associated antigens play a pivotal role in the development of rheumatoid arthritis. Standard treatment of rheumatoid arthritis is based on nonsteroidal anti-inflammatory drugs (NSAIDs), nonbiologic and biologic disease-modifying antirheumatic drugs (DMARDs) and non-specific (non-selective) immunosuppressants (hormones, cytostatic agents and others). This treatment fails to interrupt the underlying immunopathological events and is often associated with serious complications.

In conclusion. rheumatoid arthritis patients with early and advanced stages of the disease can obtain significant clinical benefits due to the application of autologous T cell vaccination.