For the first time, scientists at the University of Zurich have been able to observe stem cells in the adult mouse brain that divide over the course of several months to create new nerve cells. The study shows that brain stem cells are active over a long period, and thus provides new insights for stem cell research. 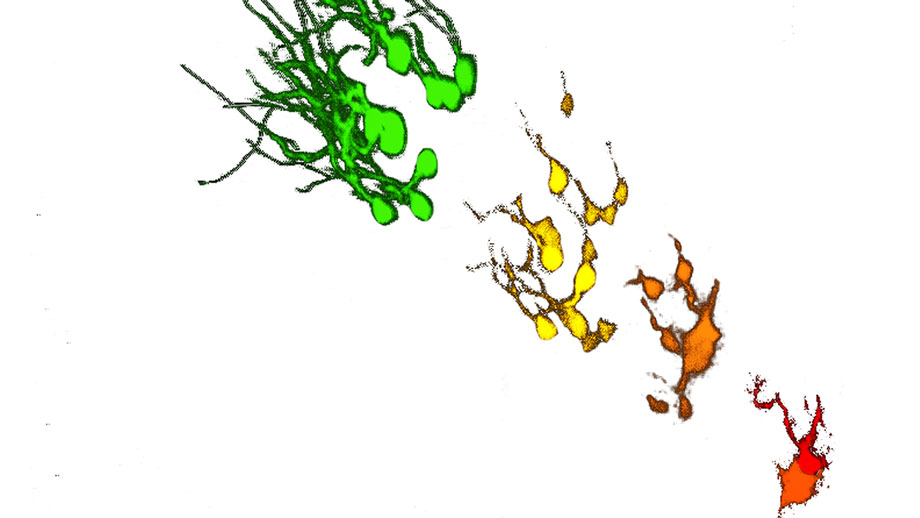 The picture shows the development over time from the stem cell (in red) via its daughter cells (orange and yellow depending on their stage of development) into new nerve cells (green) that have formed in the adult hippocampus over the course of several months. Image credit: Bottes et.al.

Stem cells create new nerve cells in the brain throughout life. One of the places this happens is the hippocampus, a region of the brain that plays a pivotal role in many learning and memory processes. A reduction in the number of newly formed nerve cells has been observed, for example, in the context of depression and Alzheimer’s disease, and has been associated with reduced memory performance in these conditions.

In a study published in Nature Neuroscience, the group of Sebastian Jessberger, a professor at the University of Zurich’s Brain Research Institute, has shown that stem cells in the hippocampus of mice are active over a period of several months. The researchers, led by PhD student Sara Bottes and postdocs Baptiste Jaeger and Gregor Pilz, employed state-of-the-art microscopy and genetic analyses (using single-cell RNA sequencing) of stem cells and their daughter cells to analyze the formation of new nerve cells. This enabled them to observe that specific stem cell populations are active over months and that they can divide repeatedly. This had already been suggested by earlier studies, but the new study provides now direct proof. The researchers also used single-cell RNA sequencing of stem cells and their daughter cells to demonstrate that stem cells with different division behavior (few cell divisions as opposed to long-lasting stem cell activity) can be differentiated on the basis of their molecular composition and gene expression profiles.

“Combining two modern methods – two-photon microscopy and single-cell RNA sequencing – has enabled us to identify precisely the stem cells that can divide over the course of months,” explains Jessberger. He adds that the now available evidence of long-lasting stem cells division has implications for future therapeutic approaches: “We now know that there really are stem cells that divide over a period of many months. Single-cell RNA sequencing gives us our first insights into what genes are important in terms of the division behavior of individual cells.”

The new findings will form the basis of future experiments to investigate in detail how specific genes control the activity of stem cells. Jessberger sums up the next research objectives: “Imaging and single-cell RNA sequencing have given us completely new insights that we will use in the future to systematically regulate the activity of certain genes in the future. Since we now know that there are stem cells that can divide over a longer period, our aim is to increase the division activity of these cells and thus the formation of new nerve cells, for example in the context of neurodegenerative conditions such as Alzheimer’s disease.”

Other scientists involved were John Cole, Merit Kruse, Vladislav Korobeynyk, Izaskun Mallona, and Fritjof Helmchen at UZH, Lachlan Harris and François Guillemot at the Francis Crick Institute (UK), and David Jörg and Benjamin Simons of the University of Cambridge (UK).