Scientists from the University of Zurich have succeeded for the first time in tracking individual stem cells and their neuronal progeny over months within the intact adult brain. This study sheds light on how new neurons are produced throughout life. 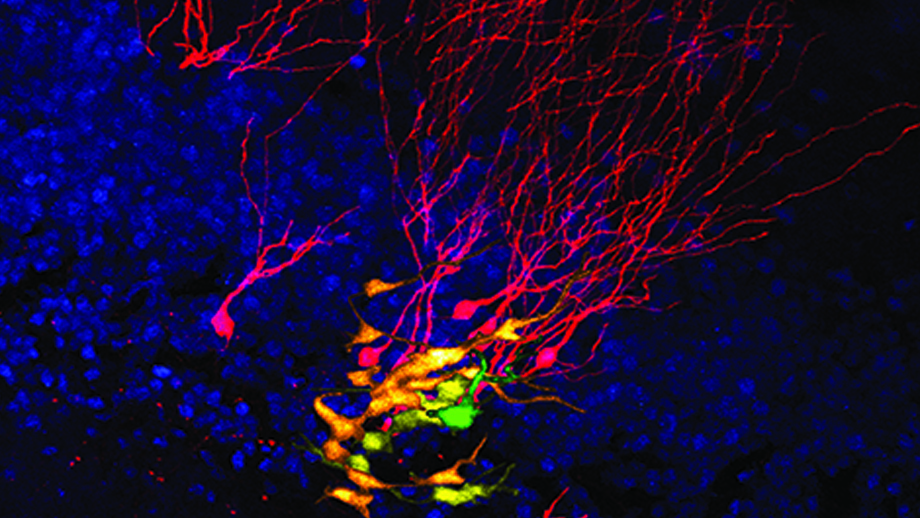 The figure shows an individual neural stem cell (green) and its daughter neurons (depending on the age shown in yellow, orange and red) that were generated over the course of 2 months within the adult hippocampus. (Image: UZH)

The generation of new nerve cells was once thought to taper off at the end of embryonic development. However, recent research has shown that the adult brain can generate new nerve cells throughout life. One of the areas where this happens is the hippocampus, a brain structure that determines many types of learning and memory, deciding what is remembered and what is forgotten.

A window into the brain

In a new study published in Science, the laboratory of Sebastian Jessberger, professor in the Brain Research Institute of the University of Zurich, has shown for the first time the process by which neural stem cells divide and newborn neurons integrate in the adult mouse hippocampus. The study, which was led by postdoc Gregor Pilz and PhD student Sara Bottes, used in vivo 2-photon imaging and genetic labeling of neural stem cells in order to observe stem cell divisions as they happened, and to follow the maturation of new nerve cells for up to two months. By observing the cells in action and over time the team showed how most stem cells divide only for a few rounds before they mature into neurons. These results offer an explanation as to why the number of newborn cells dramatically declines with advancing age.

“In the past it was deemed technically impossible to follow single cell stem cells in the brain over time given the deep localization of the hippocampus in the brain”, said Jessberger. He added that the breakthrough was only made possible by forming an interdisciplinary team. “We were fortunate that a group of collaborators, including Fritjof Helmchen from the Brain Research Institute and David Jörg and Benjamin Simons from the University of Cambridge, joined efforts to bring together their expertise in deep brain imaging and theoretical modeling, which allowed us to obtain and understand our data”.

The study answered long-standing questions in the field, but the researchers stated that this is just the beginning of many more experiments aimed at understanding how our brains are able to form new nerve cells throughout life. “In the future, we hope that we will be able to use neural stem cells for brain repair – for example for diseases such as cognitive aging, Parkinson’s and Alzheimer’s disease or major depression”, summarizes Jessberger.

Other researchers involved were Marion Betizeau and Stefano Carta from the Brain Research Institute, UZH.