Some Can Combat Dementia by Using Still-Healthy Parts of Brain

People with the rare disease called primary progressive aphasia may recruit intact brain areas for help with language, according to a new UA-led study. 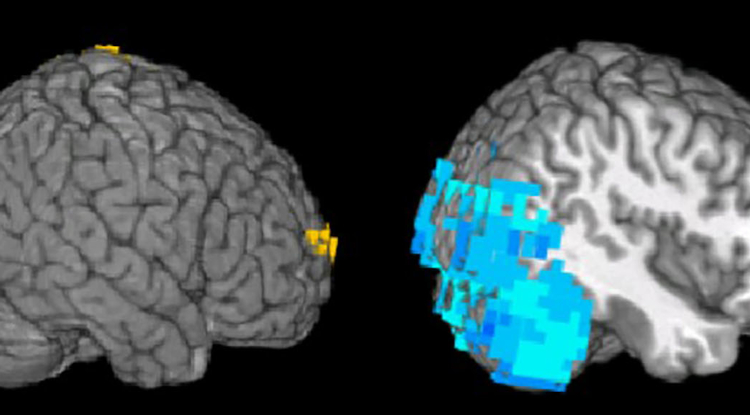 A person with primary progressive aphasia activates part of the right-hand side of their brain (shown in blue) to decipher a sentence, whereas the normal person (left-hand image) does not. (Image: Aneta Kielar/University of Arizona)

People with a rare dementia that initially attacks the language center of the brain recruit other areas of the brain to decipher sentences, according to new research led by a University of Arizona cognitive scientist.

The study is one of the first to show that people with a neurodegenerative disease can call upon intact areas of the brain for help. People who have had strokes or traumatic brain injuries sometimes use additional regions of the brain to accomplish tasks that were handled by the now-injured part of the brain.

“We were able to identify regions of the brain that allowed the patients to compensate for the dying of neurons in the brain,” said first author Aneta Kielar, a UA assistant professor of speech, language and hearing sciences and of cognitive science.

The type of the dementia the researchers tested, primary progressive aphasia, or PPA, is unusual because it starts by making it hard for people to process language, rather than initially harming people's memory.

Kielar and her colleagues used magnetoencephalography, or MEG, to track how the 28 study participants' brains responded when confronted with several different language tasks. MEG revealed which part of the participant's brain responded and how fast the person's brain responded to the task.

People typically rely on the left side of the brain to comprehend language. Some of the people with PPA who were tested showed additional brain activity on the right, and those people did better on the language tests.

Senior author Jed Meltzer said, “These findings offer hope since it demonstrates that despite the brain's degeneration during PPA, the brain naturally adapts to try and preserve function.”

Meltzer, a scientist at the Rotman Research Institute of the Baycrest Health Sciences Toronto, in Ontario, Canada, and Canada Research Chair in Interventional Cognitive Neuroscience, added, “This brain compensation suggests there are opportunities to intervene and offer targeted treatment to those areas.”

Kielar conducted the research as a part of a postdoctoral fellowship at the Rotman Research Institute.

Kielar's and Meltzer's co-authors on the paper, “Abnormal language-related oscillatory responses in primary progressive aphasia,” are Regina Jokel and Tiffany Deschamps of the University of Toronto. The journal NeuroImage: Clinical published the paper online in March.

The Ontario Brain Institute, the Alzheimer's Association, the Ontario Research Coalition and the Sandra A. Rotman Program in Cognitive Neuroscience funded the research.

Kielar became intrigued by PPA because its effects on language are so different from other dementias. PPA's unusual characteristics also make it hard to diagnose, she said.

At the early stages of the disease, people with PPA can drive, go to the grocery store by themselves and do other things that require working memory, but they have trouble reading, writing and speaking grammatical sentences, she said.

“PPA specifically attacks language initially,” she said. “I wanted to know what is special about the language regions of the brain.”

Previous research using electroencephalograms, or EEGs, of PPA patients showed that as the disease progressed, something at the neuronal level became slower. However, EEGs do not provide information about which brain region is slowing.

Therefore, Kielar and her colleagues used MEG to take images of the brains of 28 people — 13 with PPA and 15 age-matched healthy controls — as they read sentences on an LCD screen. Some of the sentences had grammatical errors or mismatched words.

The researchers also conducted MRI scans of each participant to map each person's brain.

She and her colleagues found the brains of people with PPA responded more slowly to the language tests, which was not known before.

“You can tell that they are struggling, but we did not know that the neural processing in the brain was slowed down,” she said. “It seems that this delay in processing may account for some of the deficits they have in processing language.”

She and her colleagues hope knowing which parts of the brain are damaged by PPA will help develop a treatment. There is no cure for PPA, she said.

Transcranial magnetic stimulation, or TMS, a non-invasive treatment that sends a magnetic pulse to specific brain regions, has helped people who have had strokes. Kielar and her colleagues are planning to see if TMS can slow the progression of PPA.