UA research has resulted in a melanin-producing compound for a systemic approach to preventing skin damage. 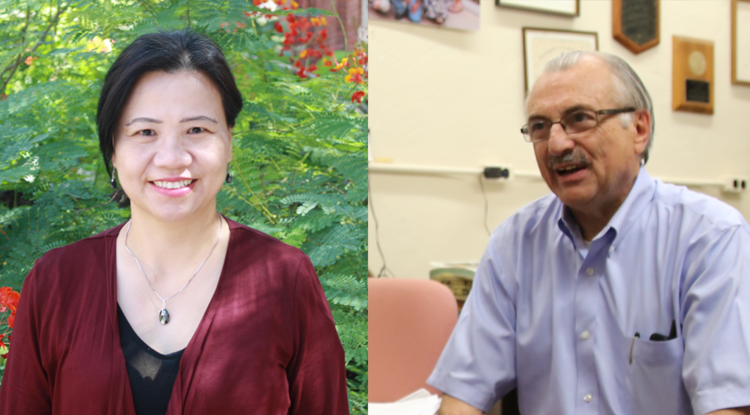 The University of Arizona has licensed two inventions developed in the Department of Chemistry and Biochemistry to startup MCR Therapeutics. The inventors, Minying Cai and Victor J. Hruby, developed targeted peptides through their research into drug design and bioactivity expression relating to hormone activity in the brain and periphery.

The peptides, which are specific for certain melanocortin receptors, represent a leap forward in novel options for skin cancer prevention, detection and treatment. The selective melanotropin peptide stimulates the natural production of skin cells that produce melanin, the pigment responsible for skin color, and provides protection against harmful ultraviolet light. Melanocortin receptors are known to play a role in many other physiological aspects, such as obesity, stress, cognition and mood. For now, MCR plans to focus first on skin; however, these peptides appear to be useful in several other indications.

With 3 million new cases diagnosed each year, skin cancer is one of the most common cancers, with more cases being diagnosed annually than all other cancers. Of those cases, estimates are that 178,560 will be malignant melanoma, and more than 9,300 people will die of the disease in 2018 in the U.S. alone.

Traditionally, sunscreens have been used to prevent skin damage from ultraviolet radiation. The problem is that such sunscreens often are applied incorrectly or incompletely and can easily wash away during outdoor activities, when such protection is needed most.

“Furthermore, most sunscreens are only partially effective compared to natural tanning 'pigmentation,' which is the basis of our discovery and allows pigmentation without the sun or a tanning salon,” Hruby said.

The research team worked with Tech Launch Arizona, the office of the UA that commercializes inventions stemming from UA research, on a number of fronts. Along with collaborating to patent the technologies, they advanced their business plan via the National Science Foundation I-Corps program to apply the “lean launch” method for launching a business and utilize the program grant for customer discovery. The team also received TLA asset aevelopment funding to bring the product closer to market readiness.

The TLA team of experts that helped with the commercialization process included licensing director Rakhi Gibbons and mentor-in-residence Mike Sember.

“We've worked with Drs. Cai and Hruby on a number of technologies and startups,” Gibbons said. “It's great to work with a team so dedicated to thinking beyond the lab and ensuring that the products of their research are moving out into the world to create impact.”

Cai and Hruby each holds appointments in the College of Science and the College of Medicine – Tucson. They also are members of the Arizona Cancer Center and the UA BIO5 Institute.

Challenge: What is the future of anti-aging skincare?