Simple and Fast Method for Radiolabelling Antibodies against Breast Cancer

Radioactive antibodies that target cancer cells are used for medical diagnostics with PET imaging or for targeted radioimmunotherapy. Researchers from the University of Zurich have created a new method for radiolabelling antibodies using UV light. In less than 15 minutes, the proteins are ready-to-use for cancer imaging or therapy. 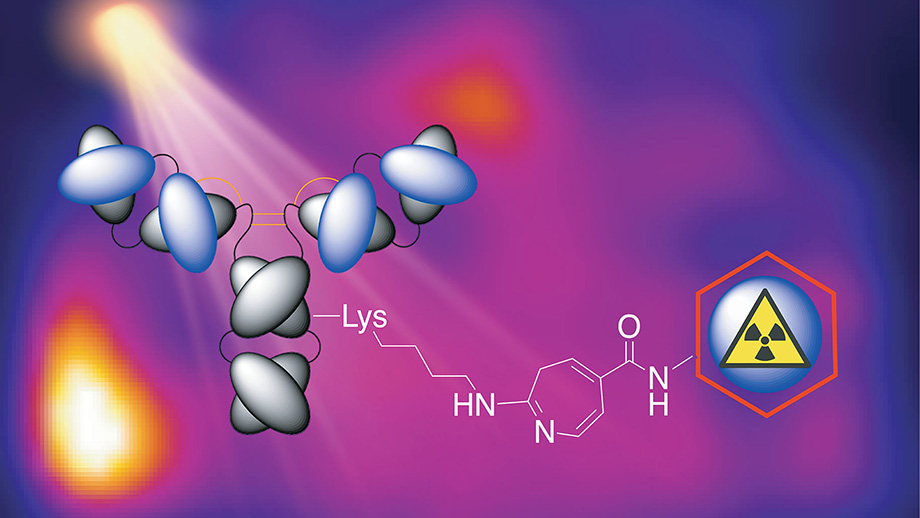 Radioactive antibodies are used in nuclear medicine as imaging agents for positron emission tomography (PET) – an imaging technique that improves cancer diagnosis and monitoring of chemotherapy. Radioactive drugs can also be designed to kill tumors by delivering a radioactive payload specifically to the cancer cells. This treatment is called targeted radioimmunotherapy.

Photoradiolabelling: Radiochemistry in a flash

Conventional methods for radiolabelling proteins are time-consuming and difficult to automate. They require multi-step procedures in which the protein is purified, coupled to a metal-binding chemical substance, isolated, stored, and then radiolabelled. The team of Jason P. Holland, professor in the Department of Chemistry at the University of Zurich (UZH), has now established a new innovative method using UV light to synthesize radioactive drugs and diagnostic agents. “By combining photochemistry with radiochemistry, we are now able to make radiolabelled proteins much more quickly and easily – literally in a flash of light,” Holland says.

The UZH researchers produced a series of novel chemical compounds called chelates that have two distinctive properties: First, they are able to bind radioactive metal ions like gallium, copper and zirconium. Second, the molecules have a special chemical group that becomes activated by shining UV light on the sample. “The UV light causes the small metal complex to react extremely quickly and efficiently with certain amino acids found in proteins like antibodies,” Holland adds.

One-pot process in less than 20 minutes

The team was able to establish a one-pot process to radiolabel trastuzumab, an antibody used to treat patients with breast cancer, with gallium in less than 20 minutes. Remarkably, the photochemical conjugation was also successful using the prepared drug that is injected into the patient without pre-purification of the antibody. “The efficient one-pot route simplifies the production of radiolabelled proteins. It has the unique advantage of avoiding the need to isolate and characterize the conjugated intermediate antibody. And the process can be fully automated,” Holland stresses.

Time is one of the main challenges in radiotracer design for PET imaging. Since gallium, which is used frequently in nuclear medicine, decays rapidly, Holland’s team further developed their method using zirconium to radiolabel trastuzumab. They managed to synthesize the radiolabelled breast cancer antibody in high yield and purity in less than 15 minutes. With mice bearing human cancer cells that are targeted by trastuzumab, they showed that for PET imaging the zirconium-labelled antibody worked as well as those produced via established methods.

“Automated photoradiochemical synthesis has the potential to revolutionize the way in which radiolabelled antibodies and other proteins are used in science and medicine,” Jason P. Holland says. Therefore, he has submitted a patent application for the new procedure and aims to develop the technology along commercial lines. Furthermore, the researchers are expanding the technology for use against other cancers.