Probing the Origin of Alzheimer's… with Transistors

A prime suspect in the onset of Alzheimer’s and Parkinson’s diseases is a normally benign enzyme that is essential to proper development of the nervous system. Under certain conditions, however, its chemical structure changes and it goes rogue, contributing to the neural devastation that accompanies dementia.

Researchers around the world are intensely investigating this enzyme, called Cdk5,* to understand its dynamics and eventually find ways to mitigate or eliminate its damage. Now scientists at the National Institute of Standards and Technology (NIST) and colleagues have devised a novel, highly sensitive system to track the activity of Cdk5 in real time with more than 10 times greater sensitivity than previously possible.

“The sensitivity of this technique can enable a new class of tests that could allow early detection of neurological conditions like Alzheimer’s disease years or even decades before the first symptoms appear,” said co-researcher Harish Pant of the National Institutes of Health (NIH). “Importantly, such diagnostic tests can be non-invasive and made using blood or platelets.”

“The traditional way of studying these molecules involves labeling biological subjects with either a radioactive or fluorescent tracer,” said NIST researcher Arvind Balijepalli, who developed the new system together with Son Le and Curt Richter at NIST, and Pant. They report their findings online in the journal Nanoscale.

“To make a measurement today,” Balijepalli said, “you put your enzymes and their substrates [their biochemical targets] in a test tube, incubate them together with specially labeled chemicals for a while, and then count the radioactive emissions or flashes of light that come out. The whole process can take as much as half a day. And it requires expensive, specialized molecule handling and radioactive material precautions.”

That method gives a good overall indication of how much total activity occurred during an extended period.

“But our system, based on a transistor structure, requires no labels and measures enzyme action thousands of times a second,” Son Le said, “so we can watch the signal change. That gives us both kinetic information about the enzyme along the way as well as static information when the process reaches a steady state.”

The system works by tracking telltale biochemical activity as Cdk5 runs amok. The enzyme’s Jekyll-and-Hyde behavior occurs because environmental factors, genetics and aging cause it to lose a part of subunit that normally restrains its activity to the orderly transfer of phosphorous-and-oxygen groups (“phosphates”) to its intended neural customers.

But when Cdk5’s regulation breaks down, it goes hyperactive and begins transferring phosphate groups to proteins indiscriminately, leading to a cascade of destructive cellular activity. In doing so, it leaves a revealing footprint: Every time Cdk5 hands off a phosphate group, it also releases one or more free protons. As the positively charged protons accumulate, they increase the acidity of the surrounding fluid. The more protons released, the more strongly Cdk5 is working. 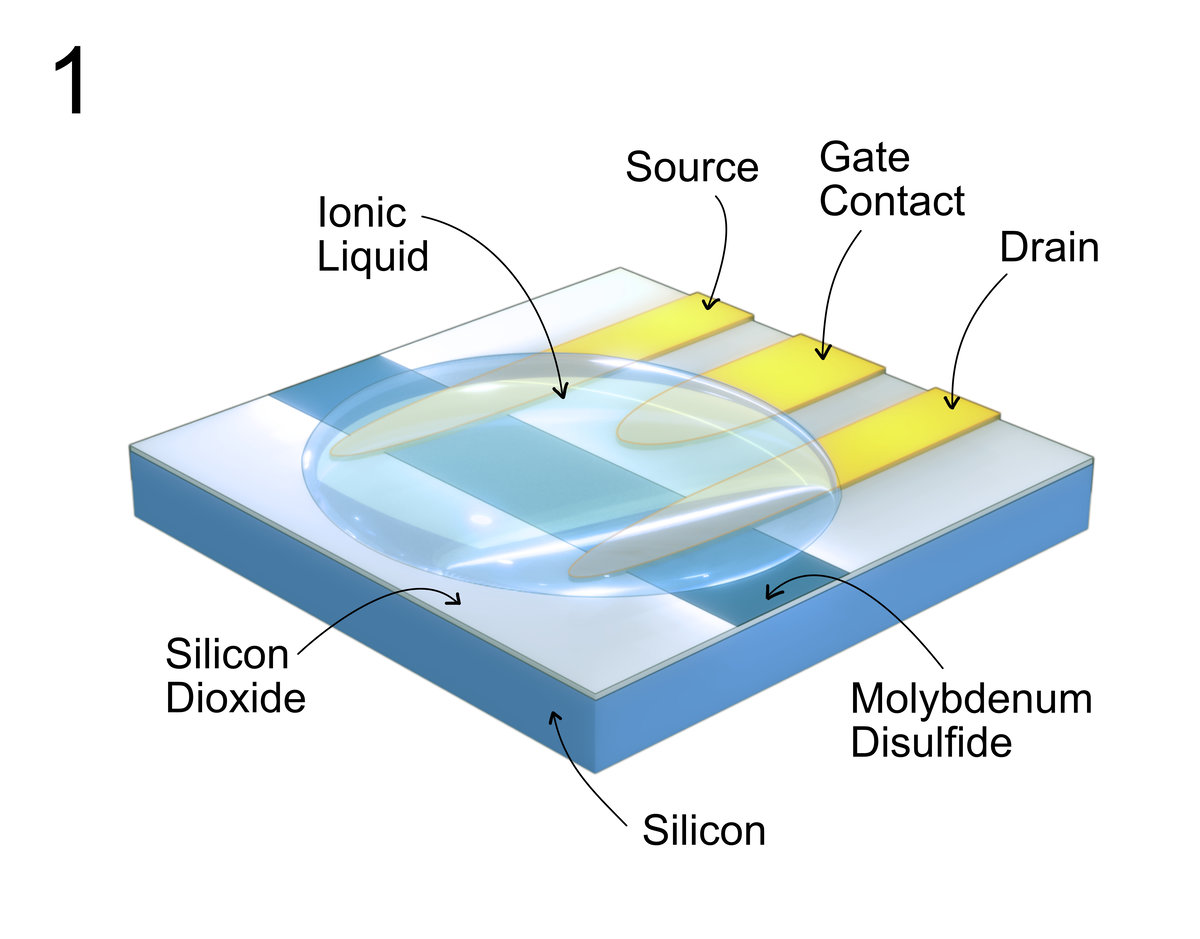 Image 1: Overall view of the transistor section of the sensor, including the liquid layer. The amount of current that flows through the liquid between the source and drain is determined by the voltage of the top gate. Ionic fluids such as saltwater are good conductors of electricity. Credit: NIST. 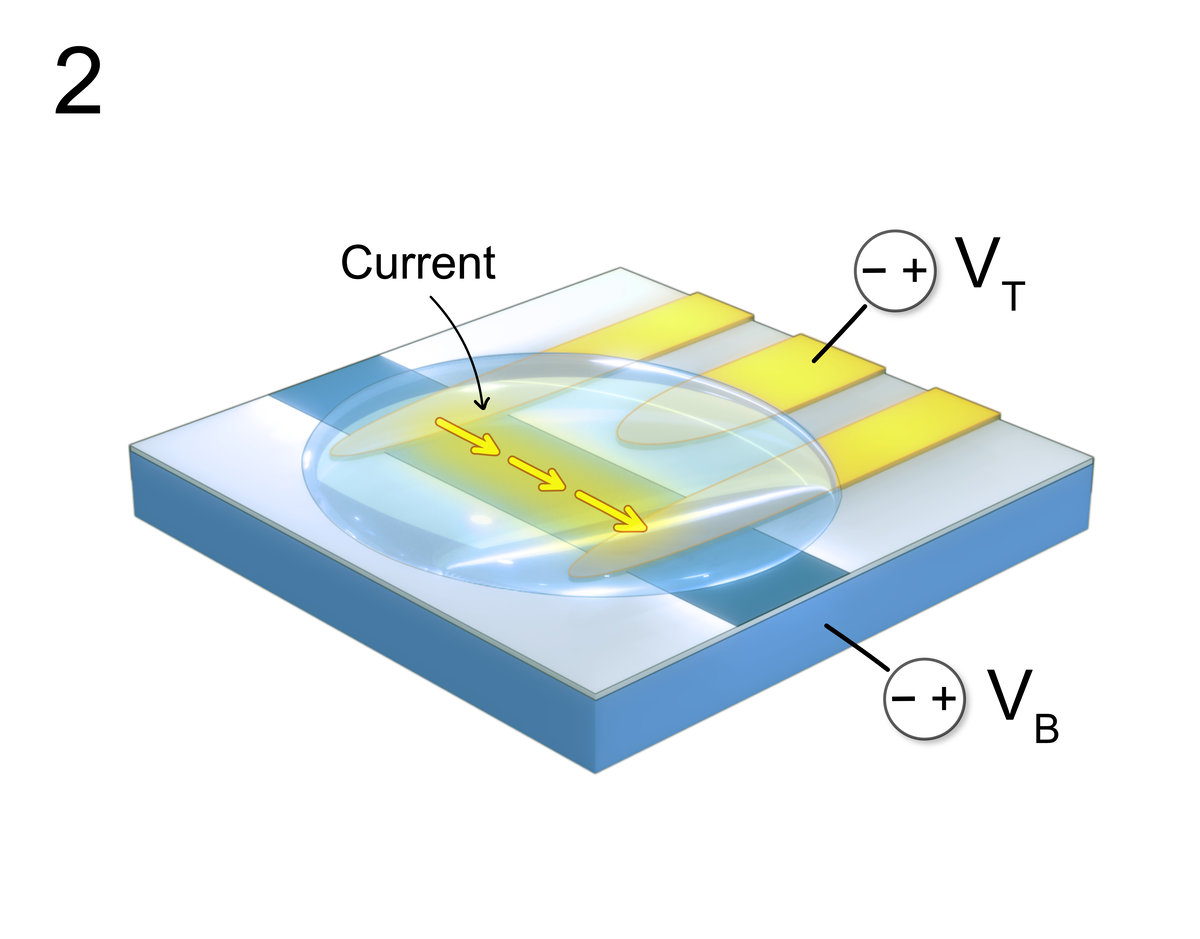 Image 2. The sensor has a second, bottom gate (VB) in addition to the top gate (VT). The bottom gate voltage can be adjusted up or down, affecting the amount of current flow across the top layer. Credit: NIST. 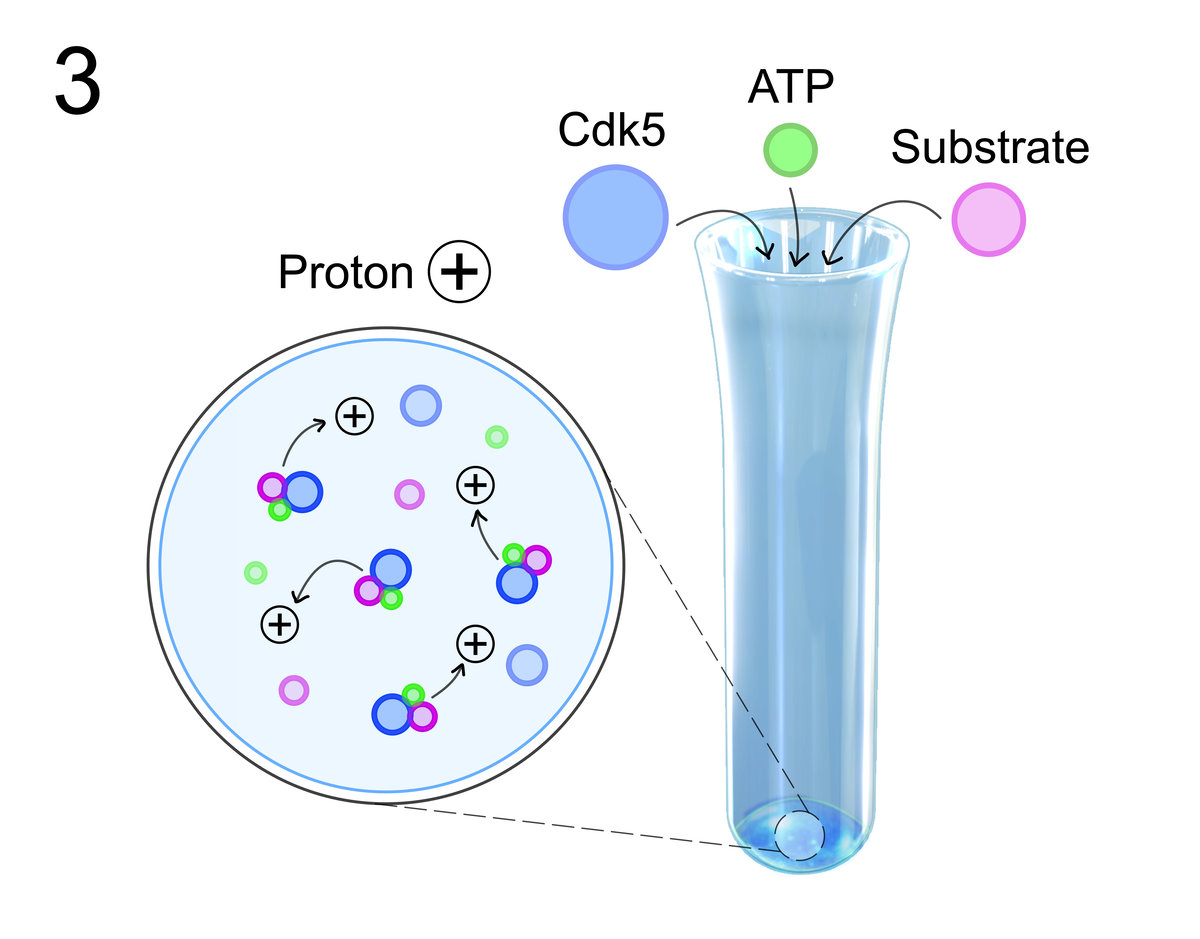 Image 3. Outside the transistor, the Cdk5 enzyme is placed in a test tube along with ATP (adenosine triphosphate, the universal energy currency of life) and a substrate (biological target) of Cdk5. As the enzyme does its work, it throws off positively charged protons, changing the electrical state of the solution. Credit: NIST. 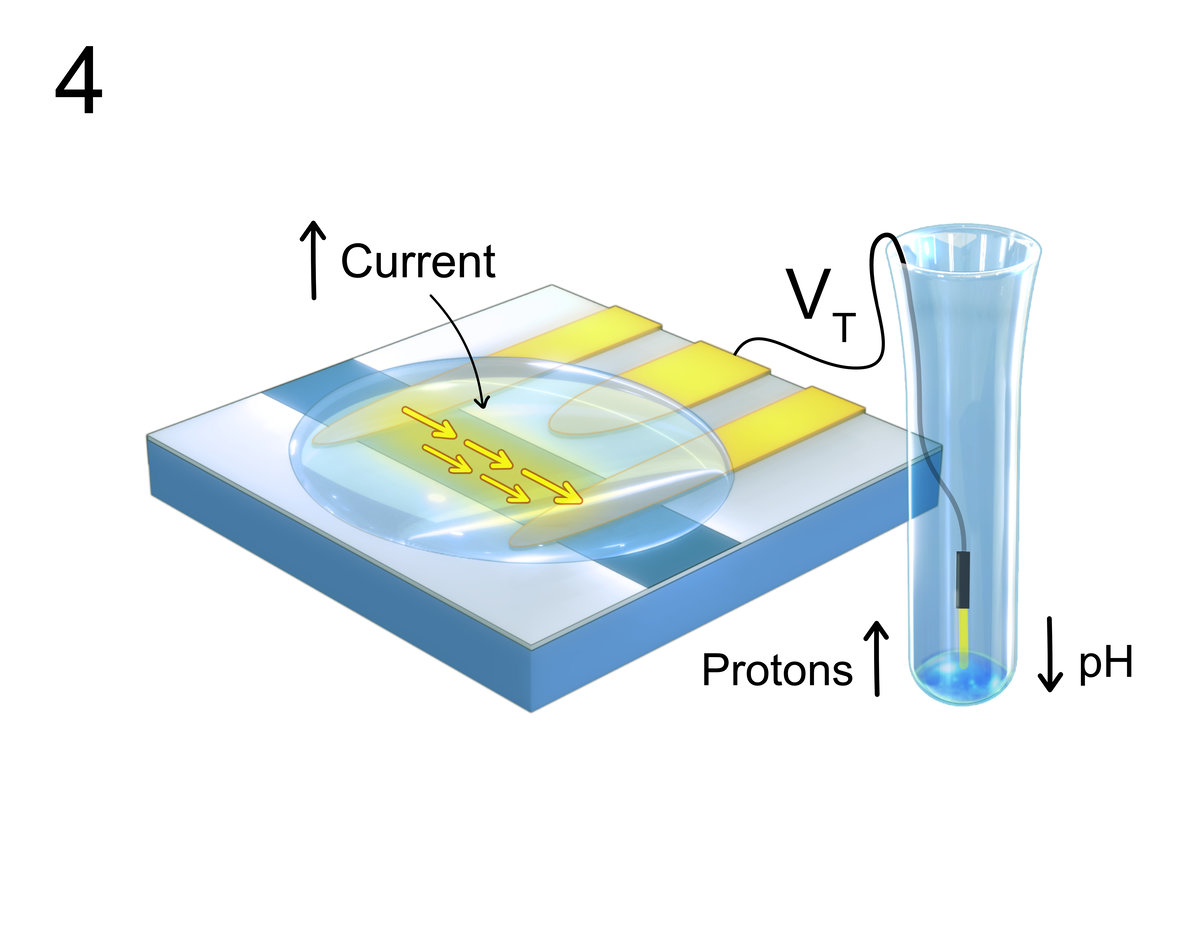 Image 4. The test tube solution is connected electrically to the transistor top gate (VT). Because of the build-up of positive charges in the solution, the connection changes the voltage at the top gate. The more protons in the solution, the more current moves across between the source and drain. Credit: NIST. 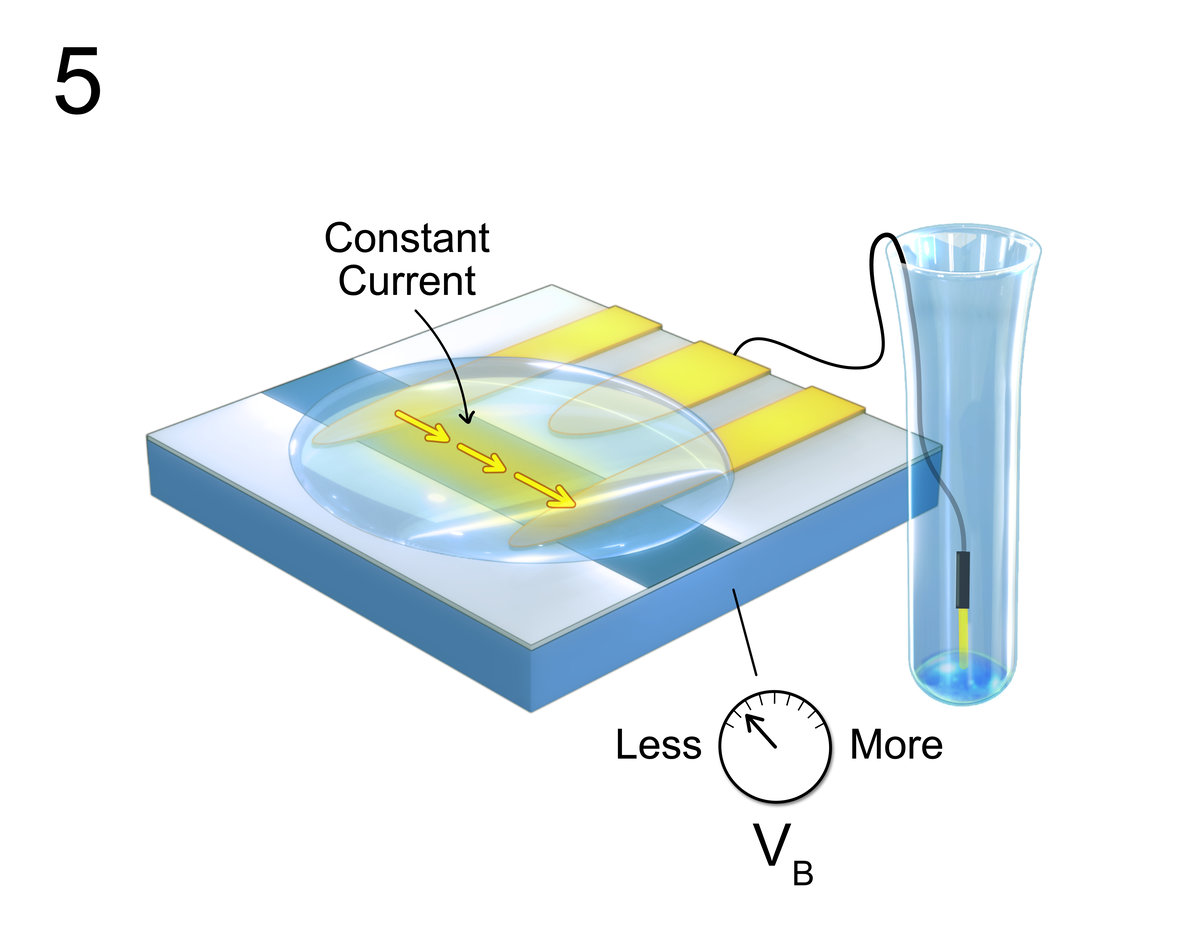 Image 5. An automated feedback system continuously alters the voltage of the bottom gate (VB) so that the current flow on the top of the transistor remains constant. The bottom-gate voltage changes thus provide a measure of the amount of Cdk5 in the solution. Credit: NIST.

To measure that activity, the researchers devised a two-gated transistor (for details, see illustrations) in which the top gate is covered by a drop of a special electrically conductive liquid that couples the top gate to electrical charges such as those associated with the protons. That liquid is connected by a wire to a separate small test tube containing deregulated Cdk5 and a selected substrate.

As the number of protons carrying positive charges accumulates in the test tube, the electrical potential between the test tube solution and the liquid gate changes. That voltage, in turn, affects how much current moves from the transistor’s source to its drain.

The device is designed to operate at constant current, which is continuously monitored by a feedback device. When a change in the voltage at the liquid gate occurs — changing the current flow — the feedback controller sends a voltage to a second, solid gate on the bottom of the transistor that compensates and keeps the current constant. The voltage applied to the bottom gate is the system’s output signal.

“That arrangement acts as an amplifier,” Curt Richter explained. “Although it takes only a tiny change in the voltage on the top gate to affect current flow, the bottom gate, which has a thick silicon dioxide layer, is much less efficient. As a result, it takes about 100 times more voltage applied to the bottom gate to maintain a constant current – giving us a magnified signal that is easier to measure. For example, if our gain were 100, a 1 millivolt [thousandth of a volt] change on the top would require a 100 millivolt change on the bottom.”

Other groups have experimented with two-gate configurations and feedback controllers. But a unique feature of the new system is its significantly increased sensitivity and the electronic circuitry that allows monitoring changes in milliseconds.

Out of the Test Tube

That extremely fine time resolution, Balijepalli said, “gives us detailed information about how these complexes form and what the mechanism of their interaction is. That could be important to understand why diseases arise in the first place. We may not know what dynamics are important without a very short measurement interval.”

That kind of information will be crucial for researchers who want to develop drugs to “re-regulate” Cdk5, and thus prevent the destructive cascades from occurring.

“At this stage,” Balijepalli said, “we’d like to see if we can use this as a drug-discovery platform. Our colleagues at NIH have a lot of experience in building protein therapeutics. They’re interested in testing the efficacy of those drugs and understanding the mechanism of their action. We believe this platform can enable both those things.”

“Even further down the road, the goal is to move out of the test tube and see if there are applications in clinical diagnostics for early detection of disease,” said Harish Pant of the NIH. “Because such tests can be made rapidly, they could be used to monitor patients with a family history of neurological disease from an early age to detect when subtle changes in enzyme activity manifest. If such diagnostic tools are developed, it will radically alter the way these diseases are treated and managed.”

In the near term, however, the team will work on improved mechanisms that can hasten adoption of the technology. “The liquid gates are very nice in that they give us high sensitivity, but are difficult to mass produce,” Balijepalli said. “It’s hard to imagine something like this easily being packaged commercially. So, one of the areas we want to pursue is how do we move back into a 100 % solid-state device while keeping some of the advantages of using liquid gates.”

* Cdk5 is a member of a class of enzymes called kinases, which donate phosphate groups from adenosine triphosphate (ATP, the body’s basic energy currency) to various substrates.